Talk to Your Children About a “Livable Wage”

What do you think is a “livable wage?” Suppose your answer might depend on where you live, but GoBankingRates estimates that a livable wage is $67,690 in the U.S. And there is a wide range from that number, as a livable wage in Alabama is very different from a living wage in California.

“Alabama is among the least expensive places in America to live — in part thanks to median housing costs of just $8,590 a year — but earning a median wage would still leave inhabitants of the Yellow Hammer State $3,288 short of a living wage.”

“The nation’s most populous state is also among the third most expensive, with a living wage translating to just about six figures if you’re planning on following the 50/30/20 rule. Even for a state with an average annual income of $75,235, those are costs that are hard to bear.”

So with the “Great Resignation” wreaking havoc on small businesses across the U.S., businesses are turning to the one thing that has always worked to attract employees: money.

Adzuna compiled a list of jobs that saw the largest salary increase in 2021 – but unfortunately many of them are still below today’s livable wage – but many are not.

THE 10 JOBS SEEING SALARIES RISE MOST OVER 2021 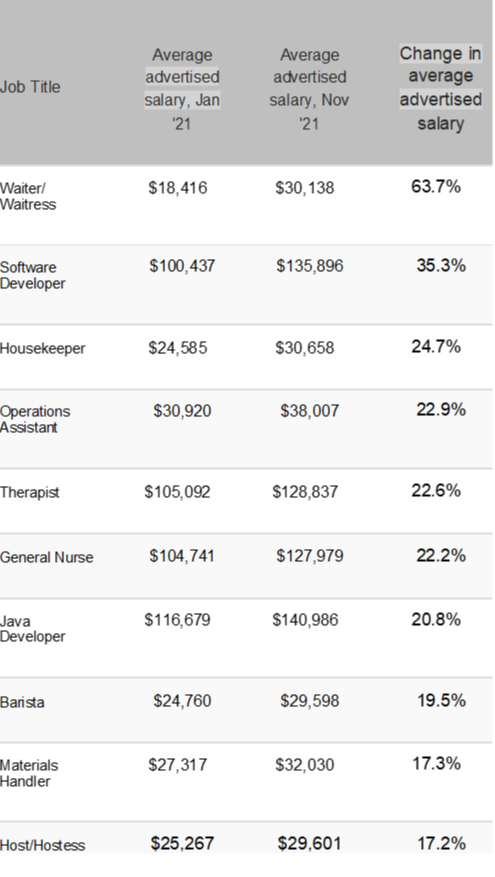 How many of our kids know that they can expect to work on average 90,000 hours? In other words, their career(s) will account for about 13 years and 2 months of their life.

And over the course of a 50–year career, they will spend about a quarter of the time at work.

Hopefully they have a financial advisor in their corner to help them consider their needs and make decisions tailored to their hopes and dreams.

For when they’re not working.