The Rising Price of Crude Oil and Gasoline Prices

What should consumers and investors expect beyond March of 2022?

The stock market in 2022 has seen large declines, beginning with a January drop, followed by a down February, and so far a declining March. Naturally, this volatility makes investors nervous.

At the center of this volatility has been the price of oil. Oil prices skyrocketed over 50% in 2021 and in the first week of March, leapt a staggering 25% in a single week (the week ended Friday, March 4th).

Consumers and businesses are spending more money on fuel, which drives inflation (cost to get goods to places has to be covered by someone). On the flip side, energy companies are making more money when oil prices rise (Marathon Oil is up over 92% over the past year). 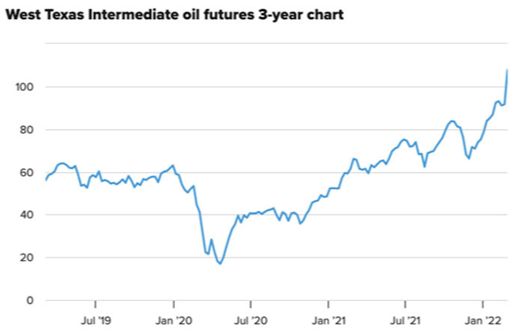 What should consumers and investors expect?

Will the price of oil and gas stay higher than it was last year or will it continue to rise?

Why does the price of oil change so much?  The price of oil is affected by so many factors and so many uncertainties.  Oil supplies are down, but demand has risen dramatically, so prices are higher.  The weather, transportation costs (via ship, truck, pipeline, etc.), and taxes also play a big role in oil prices.

The oil market has been uncertain for several reasons. For one, the U.S. is producing less oil, due to a change in our political landscape. International factors also influence the price.  Oil producers have been concerned about the health of the massive Chinese economy, with its high oil demand.  Strife in the Middle East, with ISIS, the Syrian war, and conflict in Iraq, among other things, has caused uncertainty.  And now Russia has invaded Ukraine.

Barrel of oil.  A barrel of crude oil holds 42 gallons. From this barrel will come about 12 gallons of diesel fuel, 4 gallons of jet fuel, and smaller amounts of  propane, asphalt, motor oil, and various lubricants, along with about 19 gallons of gasoline. So it takes a barrel of oil, on average, to come up with about 1.5 tankfuls of gas in your average, non-diesel car.

Considering all the oil products, each person in the U.S. consumes an average of about 2.5 gallons of crude oil per day, according to the Department of Energy. As a result, the price of a barrel of oil affects each us beyond the pump, too.

The price of oil has been a major economic factor for years.  The cost of energy affects virtually every aspect of the economy and the market, including our investments.

The supply of oil will eventually increase, especially as new producers come online and oil-producing countries change their plans.

Your financial advisor will monitor all of these developments and is best source for information about their effect on your investments.