And The Clashing Forces That Will Drive U.S. Inflation in 2022

Suppose the economy is suffering. As unemployment rises and wages remain stagnant, consumers are unable to buy additional goods and services. In response, production slows down and prices rise in order to cut losses. In this case, average prices increase due to a decrease in the supply of all goods and services.

In addition to creating higher costs for goods and services, inflation creates depreciation in currency values. As prices go up, the purchasing power of your income—dollar for dollar—decreases; that is, more dollars are needed to purchase the same amount of goods and services. In time, your personal savings and investments will have to work harder to keep up with or exceed inflation. It is important to consider inflation as you continue to save for retirement and make major purchasing decisions.

Things are about to get worse -- but after that, they should steadily get better.

That’s roughly how economists envisage the path of U.S. inflation in the year ahead.

Covid led people to spend less money on services, such as travel and entertainment, and more on merchandise like computers or sofas. That’s put enormous strain on the world’s ability to make stuff and move it around. 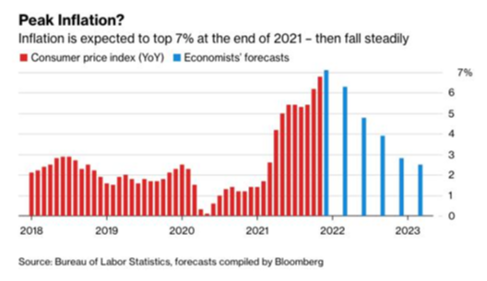 There’s unlikely to be a repeat of the lockdown-era splurge on big-ticket goods, which sent those prices soaring. Some key commodities including oil are already off pandemic highs, the Federal Reserve is hitting the monetary-policy brakes, and statistical quirks will tip the scales toward lower inflation prints.

The real-estate boom that gathered steam and pushed housing prices to record highs is leading to a surge in rents, according to measures compiled by industry groups like Zillow and Yardi. 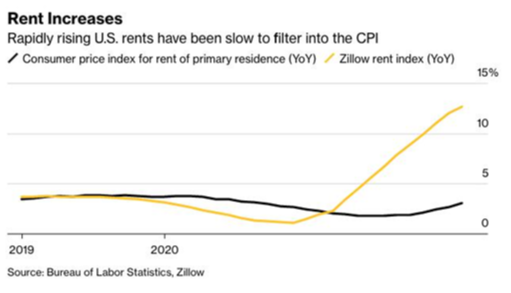 By this summer, “housing costs could be running in the 6%-7% range -- faster than at any time in the past 30 years,” according to David Wilcox at Bloomberg Economics.

Yesterday’s US CPI report gives further sustenance to the narrative that higher and more persistent inflation has caught US policymakers off guard.

A major shift in market expectations for US monetary policy is underway. Several economists believe monetary policy to be overly accommodative and expect the Federal Reserve will raise policy rates to at least 2.5% by mid-2023.